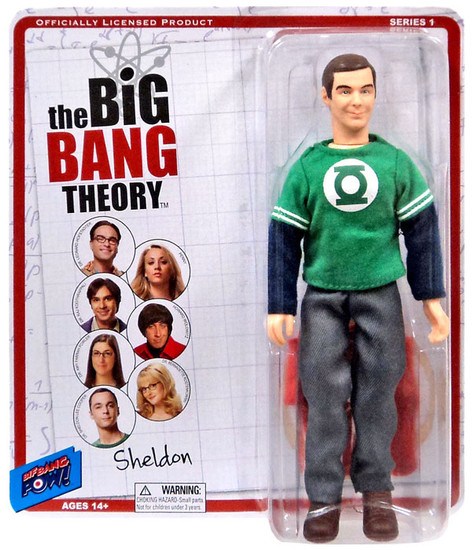 That fan-favorite fussy physicist from CBS' "nerd-com" The Big Bang Theory is here to annoy and entertain you as this Big Bang Theory Sheldon 8-Inch Series 1 Action Figure from Bif Bang Pow!. In a retro style that harkens back to the bestselling "Mego" action figures of the 1970s and 1980s, Sheldon Cooper features multiple points of articulation and stands approximately 8-inches tall in series-true fabric clothing that includes 2 shirts: Green Lantern and Flash! OK, you can shout out "Bazinga!" now.
Dr. Sheldon Cooper (Jim Parsons) is smarter than you - and he's not afraid to say so. A theoretical physicist possessing a master's degree, two Ph.D.s, and an IQ of 187, Sheldon is originally from East Texas, where he was a child prodigy, starting college at the age of 11. He has zero interest in romance, as his only real love is science. He is a stickler for routine and is very different from his family; his mother, Mary, is a devout Christian, and his twin sister, Missy, is not a scientist by any means. Superpowers: Eidetic memory, Tuvan throat singing. Weaknesses: Understanding sarcasm, driving.
retrosheldongl
814826015960
83611
Out of Stock
New