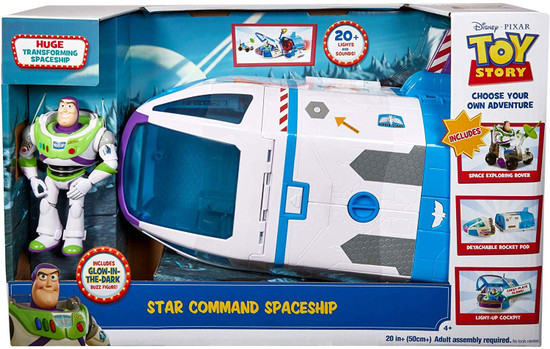 Disney Pixar Toy Story fans take off on thrilling intergalactic adventures with the Buzz Lightyear Star Command Spaceship! This deluxe rocket is loaded with special features, multiple play areas, lights, sounds, modular parts and Buzz himself! Open the playset and discover a light up cockpit with a canopy that opens to themed sound effects and fits the included, exclusive, glow in the dark Buzz Lightyear figure in the driver's seat. Power up as rocket fire lights "shoot" out the rear exhaust! Press the roof button to hear exciting sounds, phrases and exterior lights. Track missing toys from the satellite station with its swivel sonar seat and control panel. Move characters and equipment with the working claw. If enemies attack, blast them with projectiles from both wings! Then take the cool moon cruiser out to explore the planet or engage in search and rescue missions! Several accessories are modular for multiple ways to play. The sonar satellite, claw and blaster each clip to ports on the spaceship and to the moon buggy. The cockpit is detachable, too, and works with the rear exhaust flame! With so many themed areas and special features, this large Buzz Lightyear play set is the ultimate gift for fans ages 3 and up. The included Buzz Lightyear figure comes in movie-inspired relative scale for authentic action. Colors and decorations may vary.
toystorystarcommandspaceship
887961807493
308798
Out of Stock
New