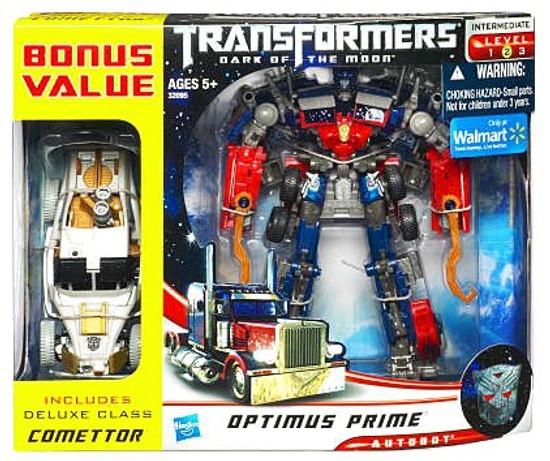 OPTIMUS PRIME and COMETTOR partner up for lunar battles. Quick, agile and tough, COMETTOR is specially engineered for ultimate performance on the harsh lunar surface. His high-caliber compressed Energon cannon easily breaks through DECEPTICON fortifications, allowing OPTIMUS PRIME and his AUTOBOT soldiers to roll in with the heavy weaponry.
Robot battle action just got fiercer than ever! This OPTIMUS PRIME figure features intricate details to make the action extra exciting. Begin the battle in robot mode with his cannons and Energon battle hooks, and then convert him to truck vehicle mode to chase down fleeing DECEPTICONS. Meanwhile, convert your COMETTOR figure from robot mode to vehicle mode, where hes a lunar buggy with an Energon assault cannon! Your enemies have no idea whats about to hit them!
dotmexclusiveprime
653569611585
120199
Out of Stock
New