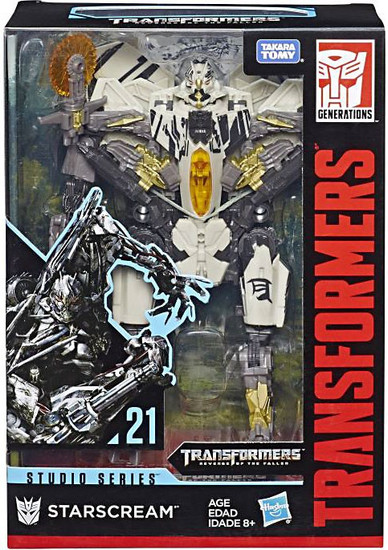 Reach past the big screen and build the ultimate Transformers collection with Studio Series figures, inspired by iconic movie scenes and designed with specs and details to reflect the Transformers movie universe. In the Forest Fight from Transformers: Revenge of the Fallen, Starscream weaves through the trees in pursuit of Sam Witwicky and the Cybertronian secrets locked inside his mind. Racing toward his prey, he's pulled into a brutal battle against Optimus Prime. This Studio Series 21 Voyager Class Movie 2 Starscream figure converts from robot to F-22 Raptor mode in 26 steps and comes with a detailed weapon accessory. Remove backdrop to showcase Starscream in the Forest Fight scene. Lockheed Martin F-22 Raptor, associated emblems and logos, and body designs of vehicles are either registered trademarks or trademarks of Lockheed Martin Corporation in the USA and/or other jurisdictions, used under license by DreamWorks, LLC. Transformers and all related characters are trademarks of Hasbro.
tragenstudsstarscream
630509715374
270029
In Stock
New