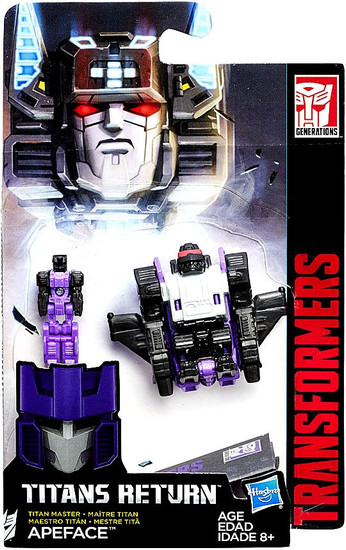 The menacing shadow of Apeface is enough to make other bots scatter. The Decepticon believes intimidation is the best weapon. He's loud, obnoxious, and strikes fear into the sparks of other bots through his bloodcurdling growls. When Apeface teams up with other bots, he gives them the ability to mass shift and grow in size.

Titan Master figures can become the head for any Deluxe Class, Voyager Class, or Leader Class Titans Return figure. This Titan Master Apeface figure converts from robot to head mode and back in 1 step. It comes with a mini tank vehicle that converts to a weapon for Titans Return Deluxe, Voyager, or Leader Class figures. Choose from Autobot and Decepticon Titan Master characters, unite them with other figures, and power up for battle.
titanmastersapeface
630509451784
133846
In Stock
New