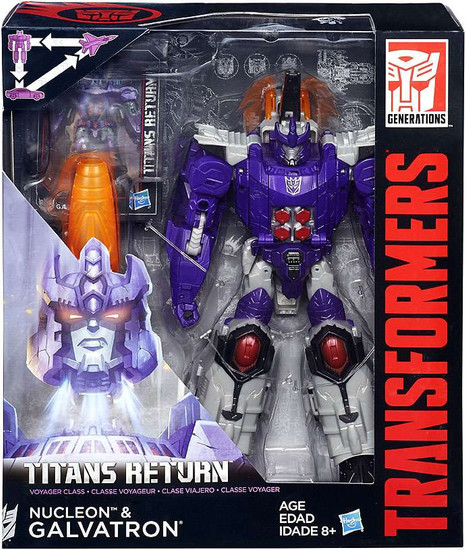 The Transformers battle explodes into uncharted territory when the Titans Return! To control an ancient race of giant, city-sized warriors -- Titans -- the Autobots and Decepticons must harness the power of Titan Masters, smaller bots that give bigger bots increased abilities in battle. Join the battle with Transformers Generations Titans Return figures.

Galvatron will risk anything for conquest, including uniting with Nucleon. Nucleon is fueled by an unstable energy source. He brings increased strength and unpredictable powers, but can damage bots he links with beyond repair. If Galvatron can successfully harness the power of Nucleon, he'll gain an overwhelmingly powerful universal systems upgrade.

Titans Return Voyager Class figures feature 3 modes! This Triple Changer Galvatron figure converts between robot, jet, and cannon modes. It converts from robot to cannon in 27 steps, then from cannon to jet in 12 steps. The Titan Master Nucleon figure converts from robot to head and back in 1 step. When the Galvatron figure is in vehicle mode, the Nucleon figure fits inside. Also includes an arm cannon accessory and a collectible character card with tech specs.
galvatrontitans
630509424313
133889
In Stock
New