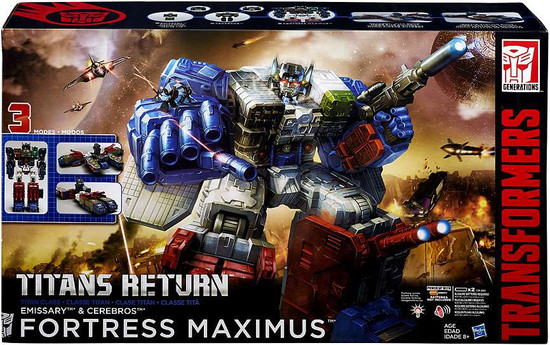 Item not eligible for total purchase discount codes.
Out of Stock
(You save )

The Transformers battle explodes into uncharted territory when the Titans Return! To control an ancient race of giant, city-sized warriors -- the Titans -- the Autobots and Decepticons must power up with Titan Masters, smaller bots that give bigger bots increased abilities. Join the battle with Transformers Generations Titans Returns figures.
Fortress Maximus is the ultimate weapon. In his alt mode, he is a city, a headquarters the Autobots can use as a base of operations. In battle, his sheer size makes him almost unstoppable. He is one of the few known Titans that remain in the universe. Whoever controls him controls a weapon of unimaginable magnitude.
This Titans Return Titan Class Fortress Maximus figure comes with a Titan Master Emissary figure and a Cerebros figure. The Emissary figure becomes the head of the Cerebros figure, and the Cerebros figure becomes the head of the Fortress Maximus figure. Unite them and power up for battle.
At nearly 2 feet tall, the Fortress Maximus figure is the biggest in the Titans Return line. The Triple Changer figure features lights, battle sounds, and 3 modes: robot, battle station, and Autobot city. When the figure is in Autobot city and battle station modes, Titan Master figures fit inside. In Autobot city mode, the figure can connect to Titans Return Leader Class figures (sold separately) to form a Cybertron City. The Titan Master Emissary figure can become the head for Deluxe Class, Voyager Class, or Leader Class Titans Return figures. Additional figures each sold separately. Subject to availability.
The Fortress Maximus figure changes from robot to battle station in 11 steps, and from battle station to Autobot city in 4 steps. The Cerebros figure changes from robot to head in 5 steps. The Emissary figure changes in 1 step. Includes 3 accessories, instructions, and a collectible character card with tech specs. 2 1.5V AAA alkaline batteries are required (not included).
fortressmaximustitan
630509424351
133795
Out of Stock
New