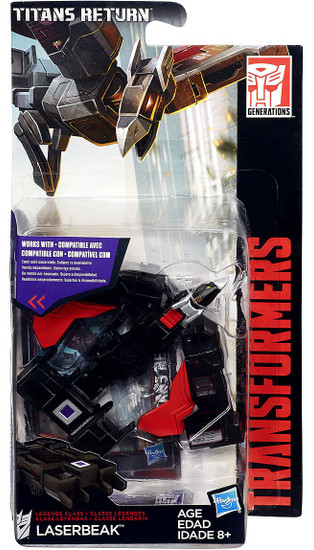 The Transformers battle explodes into uncharted territory when the Titans Return. To control an ancient race of giant, city-sized warriors -- the Titans -- the Autobots and Decepticons must harness the power of Titan Masters, smaller bots that give bigger bots increased abilities in battle. Join the battle with Transformers Generations Titans Return figures.
Laserbeak is part of a team of Decepticon spies led by Soundwave. Laserbeak is a tracker who excels at hunting down enemy targets. Hes also a fearsome interrogator who persuades captured Autobots to spill their secrets by threatening them with his laser cannons.
Titans Return Legends Class figures deliver exciting Transformers conversion play in a smaller scale. This Laserbeak figure is a Triple Changer figure that converts from beast mode to vehicle mode to spy tablet mode. In spy tablet mode, the figure fits inside the chest compartment of the Titans Return Leader Class Soundwave figure. (Sold separately. Subject to availability.) The figure changes from beast mode to vehicle mode in 7 steps, and from vehicle mode to spy tablet mode in 6. Also includes a collectible character card with character art on the front and tech specs on the back.
legendslaserbeak
630509463725
138444
In Stock
New