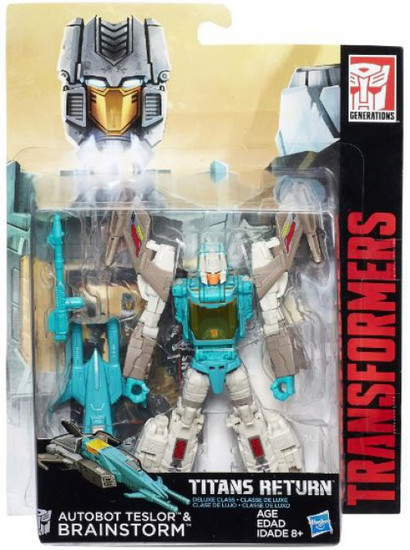 The Transformers battle explodes into uncharted territory when the Titans Return. To control an ancient race of giant, city-sized warriors -- the Titans -- the Autobots and Decepticons must harness the power of Titan Masters, smaller bots that give bigger bots increased abilities in battle.
The intelligence of Brainstorm is unrivaled. His cerebral processors are constantly running and he's always working on his next invention or technological upgrade. At times he works so fast he creates unstable inventions with explosive results. Autobot Teslor increases the brilliance of Brainstorm even further, making his genius inventions more advanced, and less likely to blow up.
This Titans Return Deluxe Class Autobot Brainstorm figure comes with a Titan Master Autobot Teslor figure. The Autobot Teslor figure becomes the head of the Brainstorm figure. Unite them and power up for battle.
Titan Master figures can become the head for Deluxe Class, Voyager Class, or Leader Class Titans Return figures. Unite this Titan Master Autobot Teslor figure with other bots to create different combinations, or unite other Titan Master figures with this Brainstorm figure. Find the best team-ups and join the battle. Additional figures are each sold separately. Subject to availability.

The Brainstorm figure converts from robot to vehicle and back in 13 steps. The Titan Master Autobot Teslor figure converts from robot to head and back in 1 step. When the Brainstorm figure is in vehicle mode, the Autobot Teslor figure fits inside. Also includes a blaster accessory and a collectible character card with tech specs.