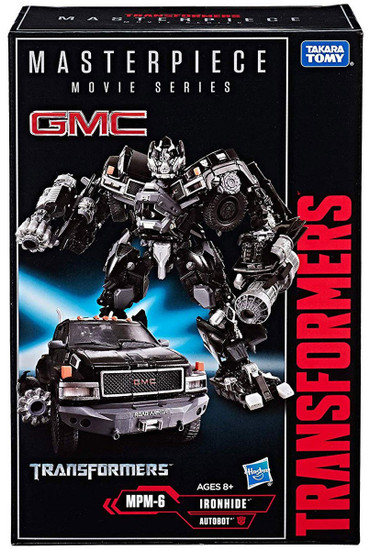 When Decepticons attack, the tactical Ironhide takes charge. He may be a little rusty around the edges, but the Autobot veteran has optics as sharp as ever and a cool head under pressure. As enemies approach, the steadfast weapons specialist seizes the opportunity to show off his cannons, all the while willing to fight to the bitter end to get the job done. The Masterpiece Movie Series Ironhide MPM-6 figure is perfect for fans and collectors alike, with features inspired by the explosive 2007 Transformers live action movie. The figure showcases the practical Autobot weapons specialist with impressive attention to detail. Imagine unleashing Ironhide action with die cast detailing, articulated hands, posable neck, movable faceplate and two cannon accessories. Converts from robot to GMC Heavy Duty Topkick 6500 4x4 Crew Cab Edition mode in 45 steps. General Motors trademarks used under license to Hasbro. Transformers and all related characters are trademarks of Hasbro.
trnsmstrironhide
630509628148
281745
In Stock
New