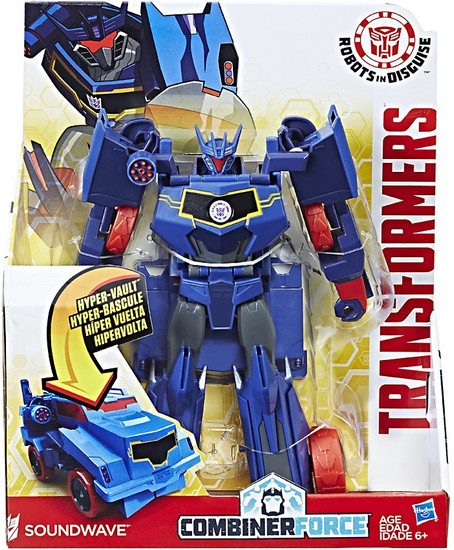 Experience the excitement of conversion in 3 awesome steps, with Transformers: Robots in Disguise Combiner Force 3-Step Changer figures. To convert this 3-Step Changer Soundwave figure from robot to tank, swing the arms up and over and flip the legs behind the head in a smooth Hyper-Vault motion. Imagine charging into battle with figures that change modes in 3 steps! Scan the Decepticon shield on this figure to unlock a token in the mobile app (see below for app details).
Soundwave is the ultimate spy, capable of locating any enemy. The treacherous signal stealer can detect any Autobot transmission and mask his own signature to avoid detection. The Autobots may not realize the Decepticon has targeted them until its too late.
Join the battle with this figure based on the Transformers: Robots in Disguise animated series.
ridhcsw
630509573554
163544
Out of Stock
New