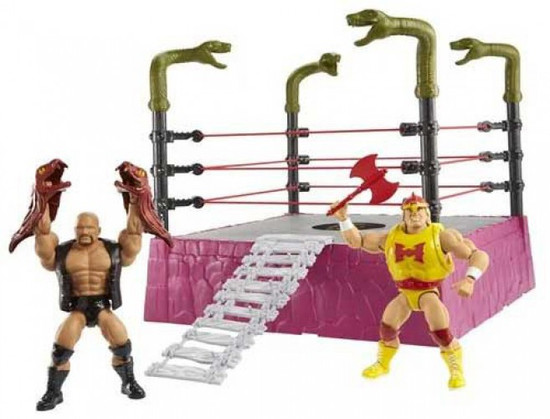 WWE and Masters of the Universe combine to form a powerful force - Masters of the WWE Universe! Channel the power with this exclusive ring-and-figures playset. Scale to the top of Rattlesnake Mountain, step through the lava ropes, and stomp a mudhole in any WWEternia Superstar who thinks they've got what it takes. Better have 24-inch pythons, because only the strong survive! It's a no-holds-barred battle between the included Hulk Hogan and Stone Cold Steve Austin 5 1/2-inch scale action figures, and only one will triumph. Colors and decorations may vary. Ages 8 and up.
The Rattlesnake Mountain ring measures 14-inches across and features a sculpted rock exterior, eerie snakes atop the ring posts, and triple ring ropes. It also comes with a wood-sculpted bridge so the figures can step up and enter the ring for the dramatic battle.
The 5 1/2-inch scale Hulk Hogan and Stone Cold Steve Austin action figures feature retro MOTU styling and 16 points of articulation for power posing and twisting into powerful battle positions. Hogan comes with a removable vest, kneepads, a helmet, and a heroic battle axe. Austin sports a removable vest, kneepads, and deadly rattlesnake arm gauntlets. Who will walk away victorious? That's up to you!
masterswwerattlesnakemountbund
887961946888
348139
Pre-Order
New