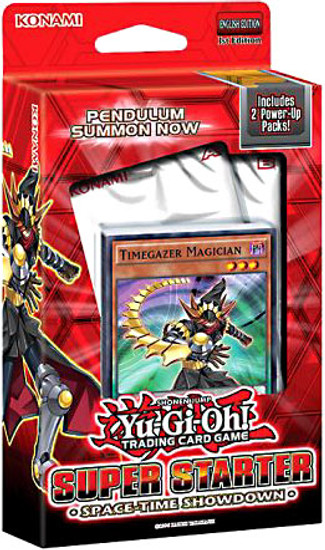 The popular Yu-Gi-Oh! TRADING CARD GAME Super Starter format returns in the newest release Super Starter: Space-Time Showdown! Designed to teach new Duelists how to Duel with friends with a 40-card pre-built Deck right out of the box, Duelists can then upgrade and build their Deck out further with two randomized Power-Up Packs containing additional cards. Super Starter: Space-Time Showdown also gives Duelists an exclusive first look at the newest game mechanic, Pendulum Monsters, an innovative new monster type that blurs the line between Monsters and Spells! Pendulum Monsters can be summoned as regular Monster cards to attack or defend, or you can activate them as Spell Cards in new Pendulum Zones to activate extra special abilities and allow Duelists to Pendulum Summon! Super Starter: Space-Time Showdown is the only product for Duelists to get their hands on these awesome new monsters before theyre unleashed with the release of the upcoming August booster, Duelist Alliance. In addition to 14 brand new cards in every Deck, each Power-Up Pack comes with 5 cards of a 15-card set, including two guaranteed Ultra Rare cards, Dark Hole and Odd-Eyes Dragon.
superstarterspacetimeshowdowndeck
083717899402
124443
In Stock
New