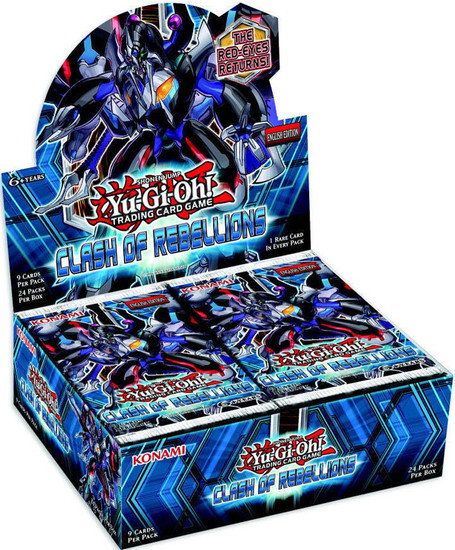 New Red-Eyes cards make a big comeback, fiery new Deck themes burst onto the stage, and more new cards for the latest Decks!Red-Eyes Monsters make a big return after almost two years behind the scenes! Clash of Rebellions introduces brand new cards to go with Joeys Red-Eyes dragon theme from the original Yu-Gi-Oh! animated series. Many of these cards will have synergy with cards from Legendary Collection 4: Joeys World.

Clash of Rebellions also presents brand new Deck themes thatll light up the Yu-Gi-Oh! TCG tournament scene: fiery new Igknight Monsters burn up their own men to Summon gigantic soldiers, flowery Aromages pump up your Life Points and gain extra powers while youre ahead, and a brand new Deck theme based on one of the most popular American fairy tales ever known that will continue to be supported in subsequent sets. In addition to new themes, Clash of Rebellions also supplies Duelists with more new cards for the latest Decks, like Infernoids, Raidraptors, Performapals, Superheavy Samurai, Toon, and more. Finally, Duelists will also be able to use Xyz Monsters for Synchro Summoning by giving them Levels.
clashofrebellionsboosterbox
083717823421
126855
In Stock
New