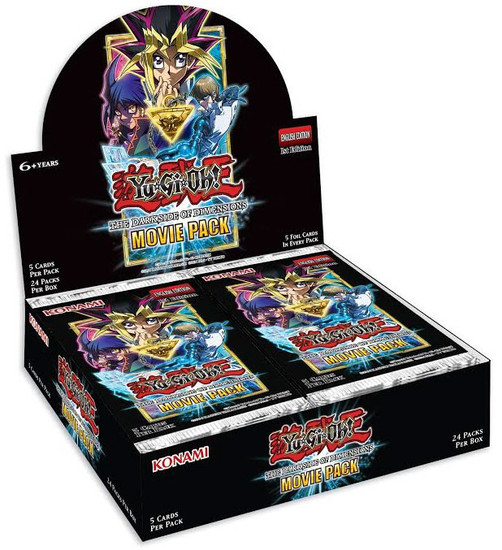 Yu-Gi-Oh! The Dark Side of Dimensions Movie Pack is a 57-card, all-Ultra Rare foil set containing 53 brand new cards and 4 old favorites with all-new artwork! Each pack contains 5 cards in a flat rarity system (all cards are equally rare).

With original Duelists Yugi and Kaiba front and center, we can all expect a lot of Dark Magician and Blue-Eyes White Dragon action.

Because Blue-Eyes White Dragon is also the star of May 2016s Shining Victories booster set, and Dark Magician headlines Augusts The Dark Illusion, Konami Digital Entertainment, Inc. is offering an early release of the Yu-Gi-Oh! The Dark Side of Dimensions Movie Pack in advance of the animated film.

This early release will enable Duelists to pack their Shining Victories and The Dark Illusion-era Decks with the powerful new Blue-Eyes and Magician cards featured in the movie! The new Neo Blue-Eyes Ultimate Dragon Fusion Monster can attack up to 3 times in one turn with its 4500 Attack Points (quickly ending almost any Duel). In the unlikely event its destroyed, this powerful Fusion Monsters spirit lingers in the Graveyard, protecting your other Blue-Eyes monsters against card effects.

What about the bad guys? The upcoming theatrical release introduces a new villain, Aigami, whose dimension dueling Cubic monsters make up a big chunk of this set. Cubic monsters have wide-ranging powers to shut down your opponents monster effects and stop them from attacking. Their math-centered strategy builds up over time, with each round of monsters getting you more cards to work with and setting up for the next level, building ultimately to their massive Fusion Monster, who slashes the opponents Life Points in half with every attack!
darksidemoviebox
083717828877
129128
Out of Stock
New