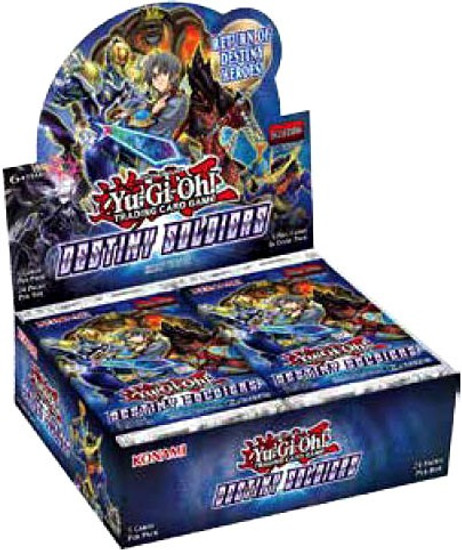 The Destiny Soldiers booster set contains 60 cards: 40 Super Rares and 20 Secret Rares.
Destiny Soldiers uses the popular all-foil 4+1 card configuration as seen in The Secret Forces and the Hidden Arsenal boosters. This set features the return of a fan favorite theme that originated in the Yu-Gi-Oh! GX animated series, an incredibly powerful new spin on the Darklords from the Yu-Gi-Oh! GX manga, and more! Heres a look at whats in store:

Aster Phoenixs popular Destiny HERO cards are back! Destiny Soldiers introduces the first brand-new Destiny HERO cards since 2008. These new cards will work together with the initially released cards but can also be played on their own.

A troupe of Pendulum Monsters with acting skills that channel their love of theatre into incredible Dueling prowess! Set the stage for your ultimate victory with an ensemble of cards that power up your own monsters and weaken your opponents.

The dastardly Darklords return! Wield brand-new Spell and Trap Cards that allow you to access forbidden abilities and monsters that can copy the effects of those Spell and Trap Cards during either players turn!
yugiohdestinysoldiersboosterbox
083717830139
137597
Out of Stock
New