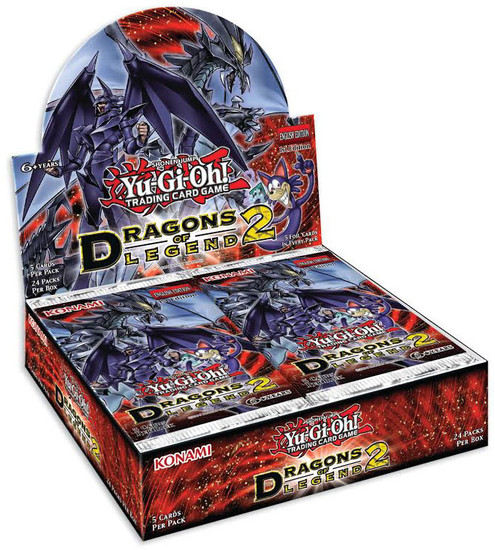 Dragons of Legend 2, the sequel to the hit 2014 booster set, delivers another all-foil set of the most anticipated, fan-requested cards from the Yu-Gi-Oh! animated TV series, made into print as actual cards for the very first time!

Dragons of Legend 2 includes several brand new cards from the original Yu-Gi-Oh! TV series, Yu-Gi-Oh! GX, and Yu-Gi-Oh! ARC-V, the newest generation of the Yu-Gi-Oh! series. Duelists can finally complete their collection of the Legendary Dragon monsters in the show with Legendary Knight Critias and Legendary Knight Hermos. Fans of Pegasus and Toon Decks will be thrilled with the arrival of several long-awaited Toon cards, like Toon Kingdom and Toon Ancient Gear Golem. Duelists will also be treated to additional cards used by Kaiba, Joey, and several characters from the new Yu-Gi-Oh! ARC-V TV series, which have never been made into actual cards until now.