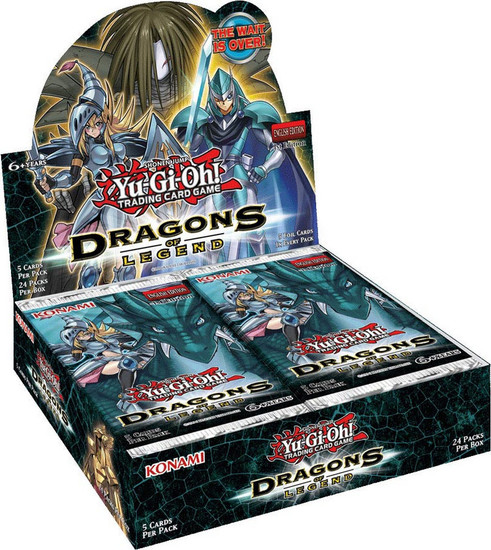 Dozens of famous cards from all four Yu-Gi-Oh! TV series cometogether in print for the first time ever! Over the years, thousands of cards have been used by characters on the Yu-Gi-Oh! TV series, and found their way into eager Duelists' decks in the real world. But thousands more cards have appeared on TV but have never made it into print as actual cards. Time to start reversing that trend! Some of the most popular and fan-requested TV cards from all 4 Yu-Gi-Oh! series make their long-awaited debuts in this set.

The Yu-Gi-Oh! TRADING CARD GAME Dragons of Legend includes dozens of brand new cards from the original Yu-Gi-Oh! TV series, Yu-Gi-Oh! GX, Yu-Gi-Oh! 5D's, and Yu-Gi-Oh! Zexal. Each pack is guaranteed to contain 4 powerful Super Rare cards along with 1 Secret Rare - the perfect power-up for any Duelist's collection!
Each 5-card pack contains 1 Secret Rare and 4 Super Rare cards.
* 5 card Booster Pack, 24 packs per display
* 50 card set, 49 of which are new for the TCG
* Contains foil cards, each Booster contains 1 Secret Rare and 4 Super Rares
* Contains new cards from the anime that have never been released in the TCG.
* Cards in this set come from each of the 4 Generations of Yu-Gi-Oh! There are new cards from Classic, GX, 5Ds and Zexal.
* Contains some brand new never-released-before cards for the Blackwing theme
* Contains extremely powerful Spell and Trap cards that appeared in the first generation of Yu-Gi-Oh!
* Contains 2 brand new Number C monsters from the Zexal Anime adding more powerful options to players Rank-Up Magic strategies.
yugiohdragonslegendbox
083717898764
123991
Out of Stock
New