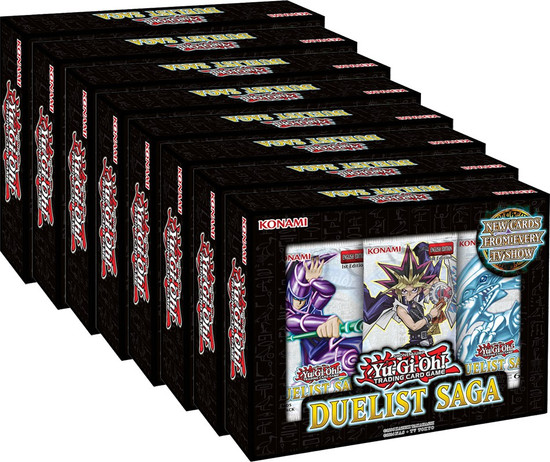 Duelist Saga also has 60 more cards that span the entirety of Yu-Gi-Oh!'s history, featuring memorable cards from the various series, the tournament scene from each era of Yu-Gi-Oh!, and sometimes both! Each Duelist Saga box contains 3 mini-packs with 5 cards each, for a total of 15 cards. Appearing for the first time in Duelist Saga, all cards in the set use an all-new, all-different Ultra Rare technology, and each mini-pack will contain 3 of the 40 new cards and 2 of the classic cards for a total of 15 cards per box: 9 new, and 6 classic!
As the Duelists of Yu-Gi-Oh! ARC-V begin their journey across dimensions, step back and look at the entire history of the Yu-Gi-Oh! franchise with Duelist Saga, a special set featuring new cards from all five incarnations of Yu-Gi-Oh! The 40 new cards in Duelist Saga are a mix of cards from the manga series, the animated series, and cards inspired by some of the coolest monsters and concepts from each series. Some of the new things you can look forward to include:

- New cards used by Mai and Bakura in the original series, including the often-requested Diabound Kernel from Bakura's Duel against Kaiba.
- The power to unleash any of the Sacred Beasts from Yu-Gi-Oh! GX in any Deck and draw an extra 2 cards per turn if you do!
- Yusei's secret ace Synchro Monster whose existence was revealed in Yu-Gi-Oh! 5D's, but was never called to action in our timeline.
- The terrifying influence of Don Thousand, the ultimate foe from Yu-Gi-Oh! ZEXAL!
- Perform death-defying Dueling feats and get rewarded with extra draws every time you do with a card that brings the excitement of Yuya's "Dueltainer" style of Dueling from Yu-Gi-Oh! ARC-V.
- Brand new "attack" Spells! Spells like Dark Magic Attack that represent the signature moves of famous monsters have always been a hit with fans, and more are on the way in Duelist Saga covering monsters from every series.

Because these new cards come from every era of Yu-Gi-Oh! they work with other cards from every era of Yu-Gi-Oh! as well. They also enhance Fusion, Synchro, Xyz, and Pendulum Summoning strategies, so these cards go great with High-Speed Riders, Wing Raiders, Dragons of Legend -Unleashed-, Destiny Soldiers, and Fusion Enforcers.
duelistsagadisplaybox
083717831273
147731
Out of Stock
New