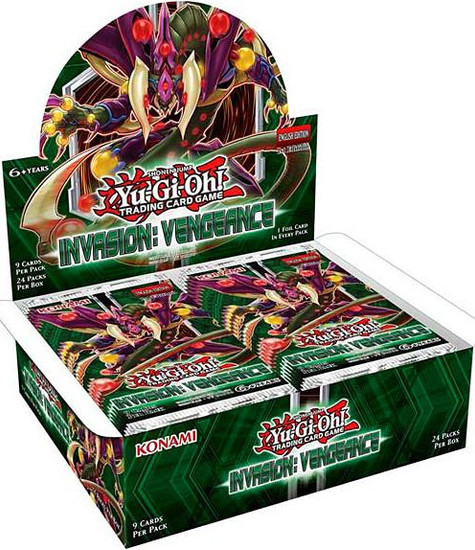 The Invasion: Vengeance booster set contains 100 cards: 48 Commons, 20 Rares, 14 Super Rares, 10 Ultra Rares, and 8 Secret Rares
Invasion: Vengeance introduces Starve Venom Fusion Dragon, a nefarious Fusion Monster that can steal the identity of enemy monsters, taking their effects and even their name! Starve Venom Fusion Dragon isnt tied to any one theme any Duelist who has DARK monsters in their Deck can use it. Joining it is Dark Requiem Xyz Dragon, an upgraded form of the popular Dark Rebellion Xyz Dragon that spells the end of your opponents monster effects and a new beginning for your fallen Xyz Monsters!

Duelists can look forward to two new themes as well as cards that greatly enhance themes from Clash of Rebellions, Dimension of Chaos, High-Speed Riders, Breakers of Shadow, Wing Raiders, The Dark Illusion, Dragons of Legend - Unleashed -, and more. Heres a taste of whats in store when Invasion: Vengeance launches in the fall!

Crystalline robots with the power to unwind time! Rewrite the hand youve been dealt to create new Summoning opportunities or erase every Spell/Trap Card your opponent has played this Duel. You can even mess with the Phases of the game by giving yourself the power to draw extra cards during each End Phase!
Cause enemy monsters to spontaneously combust with the power of science! Play with Gemini monsters comprised of the fundamental elements of life that bind together through their team-oriented effects. Summoning their ultimate Xyz Monster is the perfect formula for victory, forcing your opponent to eliminate one of their own cards every time you Normal Summon!
More Metalfoes! The high-speed heavy metal heroes are back to show off their brand-new Fusion techniques. With the newfound ability to merge during either players turn and with either players monsters these new Metalfoes cards will put you in the fast lane towards victory!
Subterror Behemoths continue to awaken, leaving the denizens of the deep trembling in fear. Tame these new behemoths and youll be able to pacify and annihilate entire armies of monsters with their devastating one-two punch!
SPYRAL Super Agent has received new orders! There are strange dealings afoot at a popular international resort, and youll need to make contact with SPYRALs embedded agents to unravel the mystery and power up your Deck.
New cards for a huge variety of popular past themes, from Aliens all the way to Yang Zing!
invasionvengeanceboosterbox
083717829812
136448
In Stock
New