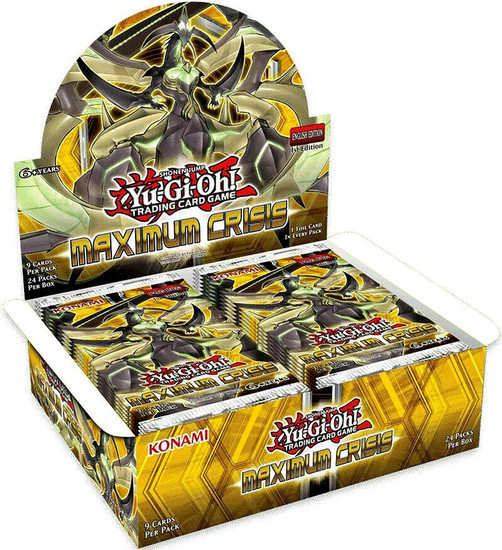 Maximum Crisis YuGiOh set features:
The walls between dimensions are collapsing and the supreme king of destruction will rise in Maximum Crisis, Mays all-new 100-card 1st Edition booster set! Maximum Crisis is the climax of the 2016-2017 Dueling season, introducing three new themes as well as bold new cards for a wide variety of popular Decks.
Pendulum Summoning will undergo its final evolution in Maximum Crisis with a pair of Pendulum Monsters with Scales of 0 and 13, opening up the ability to Pendulum Summon monsters of any Level in any Deck! But thats not the only type of Summoning thats evolving. Following up on Februarys Fusion Enforcers set, Maximum Crisis introduces a new Fusion Summoning Spell Card that lets you keep your Fusion Monster while giving back the monsters you just fused together!
Heres a brief overview of what else you can expect in Maximum Crisis:
The dawn of the True Draco monsters! These monsters can be Tribute Summoned using Continuous Spell/Trap Cards instead of monsters, and their Continuous Spell/Trap Cards have multiple effects depending on whether you just activate them or Tribute them.
A brand new way to win a Duel! Even if you cant damage your opponent with this new themes ace monster, if you can power it up enough, destroying 3 of your opponents monsters with it will automatically end the Duel!
New Winged Beasts that fly over enemy monsters for fast direct attacks and effects that inflict damage.
Individually powerful cards to cover a variety of common situations in everyday Dueling.
The mastermind behind the global plot has been revealed, and SPYRAL embarks on its final mission to take him down!
All is not yet lost! The final battle against the Subterror Behemoths begins and the Subterror Nemeses receive help from an unlikely source!
Cards that boost Decks and themes from Fusion Enforcers, Raging Tempest, the Pendulum Domination Structure Deck, Invasion: Vengeance, The Dark Illusion, Shining Victories, Wing Raiders, the Master of Pendulum Structure Deck, High-Speed Riders, and more!
The Maximum Crisis booster set contains 100 cards: 48 Commons, 20 Rares, 14 Super Rares, 10 Ultra Rares, 8 Secret Rares.
maximumcrisisboosterbox
083717832096
151120
Out of Stock
New