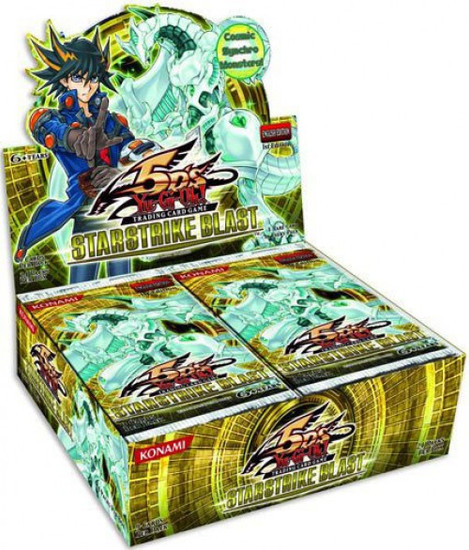 Wishing for a powerful new booster set to end 2010 with a bang? Your wish has been granted! Starstrike Blast will hit the Dueling world like a meteor, starting with two of the biggest Synchro Monsters ever: Shooting Star Dragon and Red Nova Dragon.

Formula Synchron is only Level 2, so its a little tricky to Summon since your Tuner and non-Tuner have to both be Level 1. But thats easy with the new Trap Card: Mischief of the Yokai. This Trap reduces all monsters by 2 Levels for the turn, so all your Level 3 & lower monsters will become Level 1. That makes it easy to Summon Formula Synchron. And an easy Formula Synchron means an easy Shooting Star Dragon!

The other Synchro Monster is Red Nova Dragon, which is so huge that it requires 2 Tuner monsters to Summon. But its worth the effort, because it has a minimum of 4500 ATK, cannot be destroyed by card effects, and can protect your weaker monsters from being attacked!

Tuning is a new Spell Card that lets you add 1 Synchron Tuner from your Deck to your hand, so its easy to Summon Yuseis top Synchro Monsters like Drill Warrior and Junk Destroyer. Starstrike Blast also has new Tuners like Glow-Up Bulb and Scrap Mind Reader, which you can use twice by bringing them back from the Graveyard. This all makes Synchro Summoning easier than ever!

Finally, if youre the kind of Duelist that loves to mess with your opponents strategy, this is the set for you, with new cards like Skull Meister, Droll & Lock Bird, Spellstone Sorcerer Karood, and Psi-Blocker. Discard Skull Meister to stop your opponent from using effects in the Graveyard, or discard Droll & Lock Bird to stop them from drawing a ton of extra cards! Spellstone Sorcerer Karood can keep removing your opponents cards from the Graveyard. And Psi-Blocker works like Prohibition while its on the field, except that you can change the prohibited card every turn!
yugiostarstrikeblastbox
4012927147733
118621
Out of Stock
New