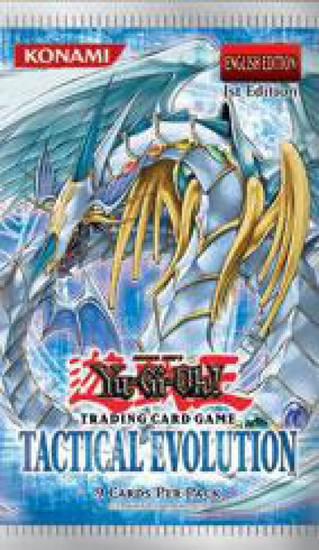 Tactical Evolution (TAEV) is the 24th booster pack released in the Yu-Gi-Oh! Trading Card Game. It is the largest GX generation booster, with 90 cards. It introduces a new category of monster like Toons, Unions and Spirits Gemini Monsters, as well as a new mechanic: Gemini Summon. The ratio of Ultra Rare cards gets increased, a new rarity above Ultimate Rare is introduced, called "Holographic Rare" in the OCG and "Ghost Rare" in the TCG. It also releases Jesse Anderson's best monster "Rainbow Dragon". Anime fans will be confident with the content. There is also appearances of the "Venom" cards used by Professor Viper. There are also more "Elemental HERO" monsters and new "Neo-Spacian" support, like the "Chrysalis" monsters. This set also features improvements to the long-neglected Reptile Type, with the aforementioned "Venom" cards and new "Alien" and "Cyberdark" support.
tacticalevolutionpack
053334537544
117271
Out of Stock
New