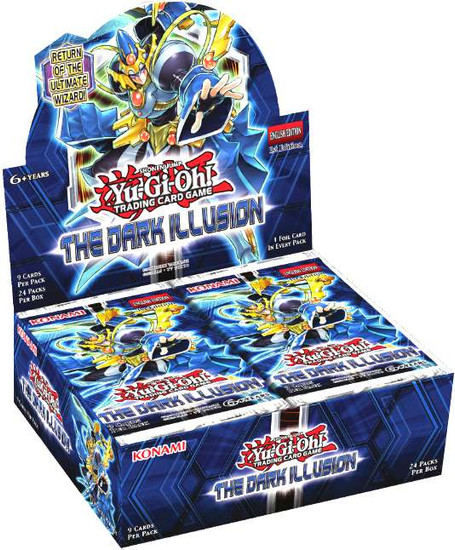 Yugis strategy relies on his famous Spells and Traps, befitting the cunning and guile of a master magician. The Dark Illusion gives Spellcasters access to powerful cards like Magician Navigation, which Summons a Dark Magician from the hand and another DARK Spellcaster of your choice right from the Deck, then goes on to negate an enemys Spell or Trap! Theres also the Dark Magical Circle, the famous ring seen on many of Yugis cards, now finally made into a Spell Card in its own right.

The Dark Illusion also introduces four new themes:
Meet the Metalfoes, a new Psychic theme of Fusion and Pendulum monsters that ride high-tech monster-sized vehicles into battle! Metalfoes are easy to Summon, come with high Attack Points, and have several powerful Spells and Traps that boost their strength, Summon more monsters, and help them draw more cards. Metalfoes Decks are fast and easy to build, giving new and experienced players a great starting off point for creating a new Deck.
Journey to the center of the Earth and discover colossal giants made from living rock, who use their gigantic stats and awesome effects in a never-ending war against Shambhala, the hidden city of mysteries!
Triamids are living pyramids, using their pyramid power to put a brand new spin on the game. These EARTH monsters gain their strength from the land itself, by using multiple Field Spell Cards one after the other. Triamid Field Spells are designed to be played and replaced, to then power up the mighty Triamid Sphinx monster even from the Graveyard.
And SPYRAL sneaks into the fray, a secretive organization using its super-spies and high-tech devices to control the field. (What does SPYRAL stand for? Dont ask its a secret!)
thedarkillusionboosterbox
083717828068
132220
Out of Stock
New