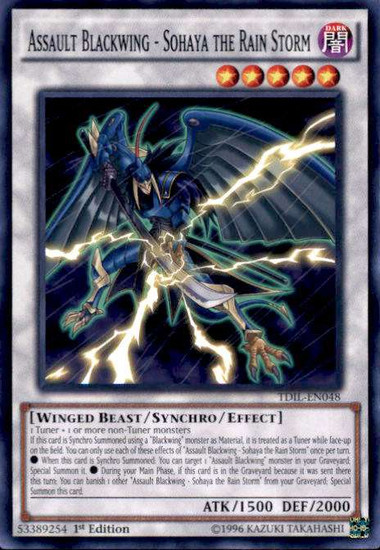 Dark. WingedBeast/Synchro/Effect. 5. 1 Tuner + 1 or more non-Tuner monstersIf this card is Synchro Summoned using a "Blackwing" monster as Material, it is treated as a Tuner while face-up on the field. You can only use each of these effects of "Assault Blackwing - Sohaya the Rain Storm" once per turn. When this card is Synchro Summoned: You can target 1 "Assault Blackwing" monster in your Graveyard; Special Summon it. During your Main Phase, if this card is in the Graveyard because it was sent there this turn: You can banish 1 other "Assault Blackwing - Sohaya the Rain Storm" from your Graveyard; Special Summon this card.
tdilen048
643690286431
138536
In Stock
New