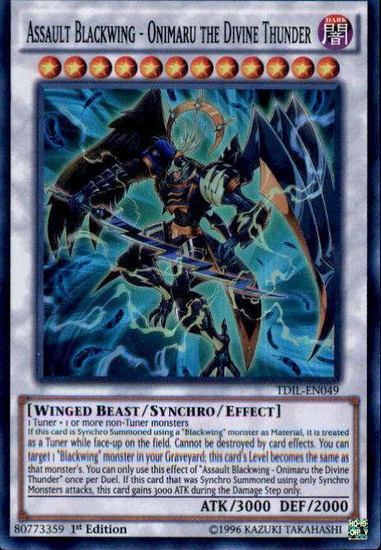 Dark. WingedBeast/Synchro/Effect. 12. 1 Tuner + 1 or more non-Tuner monstersIf this card is Synchro Summoned using a "Blackwing" monster as Material, it is treated as a Tuner while face-up on the field. Cannot be destroyed by card effects. You can target 1 "Blackwing" monster in your Graveyard; this card's Level becomes the same as that monster's. You can only use this effect of "Assault Blackwing - Onimaru the Divine Thunder" once per Duel. If this card that was Synchro Summoned using only Synchro Monsters attacks, this card gains 3000 ATK during the Damage Step only.
tdilen049
643690252856
138537
Out of Stock
New