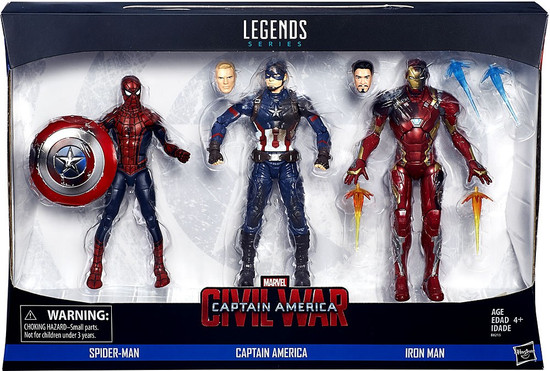 When the lines between right and wrong are blurred, which heroes will emerge victorious?Enter the battle with this pack of 3 Marvel Legends Series figures, including Iron Man, Captain America, and Spider-Man figures. With this super trio, kids can imagine sending their favorite heroes in battle action.
Each figure is 6-inch scale and features multiple points of articulation.
TeamCap or TeamIronMan? Bring the next big thing in Marvel Legends home with the Captain America Civil War Marvel Legends Spider-Man, Captain America, and Iron Man Set. Each marvelous 6-inch action figure sports amazing deco that make Spider-Man, Captain America, and Iron Man look like they stepped right out of a fight on the big screen. With at least 20 points of articulation on each figure, this is the perfect trio to decorate your desk and relive your favorite moments from the big movie! It's also the perfect place to start your Marvel Legends action figure collection. Set includes 3 fully poseable action figures, 2 alternate heads, and 4 blast effects. Ages 8 and up.
The world action figure debut of Tom Holland Spider-Man from Captain America: Civil War!
It's your chance to get your favorite characters as exquisitely detailed 6-inch tall action figures!
Spider-Man has his Marvel Cinematic Universe costume debut while Cap and Tony feature awesome battle-damaged deco.
Set includes 3 fully poseable action figures, alternate Tony Stark and Steve Rogers heads, and 4 blast effects.
civilwar3pack
630509447411
133781
Out of Stock
New