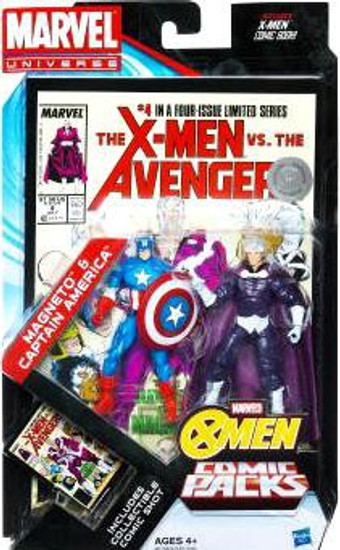 One of the worlds most powerful mutants has become one of its most wanted! The search is on for MAGNETO, the former villain who now fights for good as one of the X-MEN. Russian Super Soldiers and The AVENGERS have tracked him to Southeast Asia. When the AVENGERS finally get to him, MAGNETO teleports most of the team away, leaving CAPTAIN AMERICA to bring MAGNETO to justice alone.
Reenact the epic battle between MAGNETO and CAPTAIN AMERICA with this awesome figure set! Includes an X-MEN comic book with content from The X-Men vs. The Avengers #4 and a collectible comic shot. Whether facing each other on the battlefield or in your collection, these figures are sure to cause a stir!
Featuring former villain mutant MAGNETO and AVENGERS superhero CAPTAIN AMERICA! Comes with X-MEN comic book with content from The X-Men vs. The Avengers #4! Also includes collectible comic shot! Set includes 2 figures, comic book and comic shot.
comicpackmagnetoamerica
653569766148
122023
Out of Stock
New