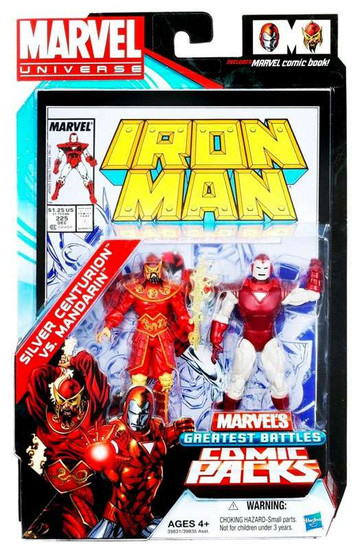 There couldnt be two more perfect rivals than Tony Stark and MANDARIN. Two geniuses, each on opposite sides of the world and opposite sides of justice. Starks power comes from his IRON MAN armor, the most advanced technology on Earth. MANDARIN draws his powers from ten mysterious rings that are not of this world. Each has come close to tasting defeat in their ongoing battle. Neither will stop until final victory is won!
Get in on the fast-paced action and excitement as you stage epic battles between your SILVER CENTURION and MANDARIN action figures! Re-create your favorite scenes from the included comic book or create your own super-powered showdowns. With these mighty articulated action figures, theres just no stopping the action!
These 2 heroic SILVER CENTURION and MANDARIN action figures are carefully detailed and ready for combat! They come with an action-filled MARVEL comic book. Pack includes SILVER CENTURION figure, MANDARIN figure and comic book.
WARNING: CHOKING HAZARD Small parts. Not for children under 3 years. Ages 4 and up.
ironmanmandarin
653569709008
120913
Out of Stock
New