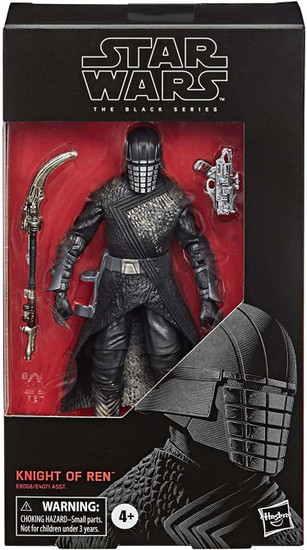 An enclave of masked warriors wielding distinct weapons for ranged and close quarters combat, the Knights of Ren are elite, fearsome enforcers of Kylo Ren! The 6" scale Black Series Knight of Ren action figure is detailed to look like the character from Star Wars: The Rise of Skywalker, featuring premium detail, multiple points of articulation and two Knights of Ren-inspired accessories.
Kids and fans alike can imagine the biggest battles and missions in the Star Wars saga with figures from The Black Series! With exquisite features and decoration, this series embodies the quality and realism that Star Wars devotees love.
Each 6-inch-scale Knight of Ren figure is carefully detailed to look like his appearance in the film The Rise of Skywalker. He features premium details and multiple points of articulation, and includes character-inspired accessories.
blackknightren
630509902934
311984
In Stock
New