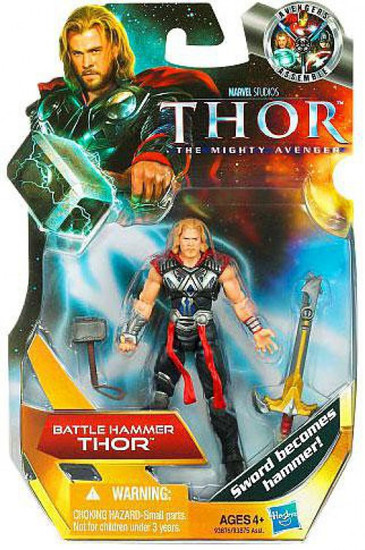 Thor Mighty Avenger Battle Hammer Action Figure - Thor is known across the cosmos as the mightiest warrior in all the Nine Realms. He has defended the divine kingdom of Asgard for a millennium from the darkest forces of the Marvel Universe. With his legendary hammer, Mjolnir, in his hand, he is an unstoppable force who commands both the lighting and the storms.

Defeat the forces of evil wherever you and your Battle Hammer Thor figure find them. This brawny-looking warrior is already a force to be reckoned with, but his sword accessory holds an extra advantage: it becomes a "battle hammer" for crushing his foes! The battles you and your mighty Thor figure fight are sure to become "legendary".