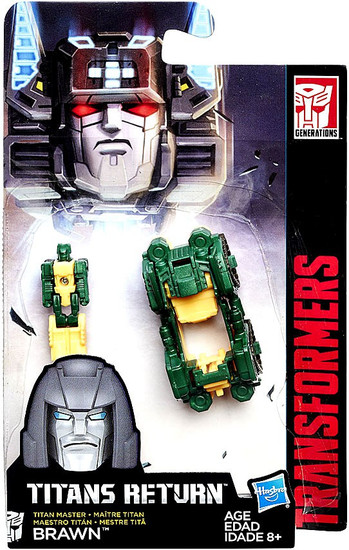 Brawn wouldnt want any bot mistaking his small size for an easy target. The Autobot boldly welcomes any and all challenges, even if that challenge is a Decepticon 10 times his size. His overconfident attitude sometimes lands him in trouble he has to fight his way out of, but thats just the way Brawn likes it. When Brawn teams up with other bots he enhances their armor making them virtually indestructible.

Titan Master figures can become the head for any Deluxe Class, Voyager Class, or Leader Class Titans Return figure. This Titan Master Brawn figure converts from robot to head mode and back in 1 step. It comes with a mini tank vehicle that converts to a weapon for Titans Return Deluxe, Voyager, or Leader Class figures. Choose from Autobot and Decepticon Titan Master characters, unite them with other figures, and power up for battle.
titanmastersbrawn
630509451791
133845
Out of Stock
New