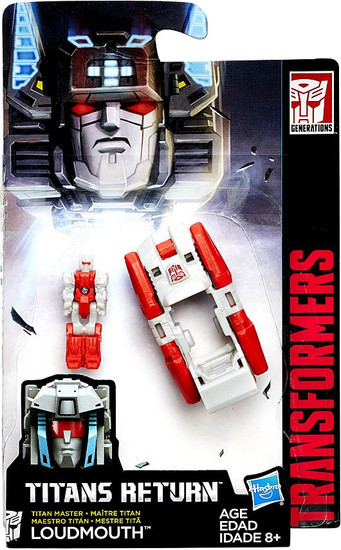 The Transformers battle explodes into uncharted territory when the Titans Return! To control an ancient race of giant, city-sized warriors -- the Titans -- the Autobots and Decepticons must harness the power of Titan Masters, smaller bots that give bigger bots increased abilities. Join the battle with Transformers Generations Titans Return Titan Master figures!
Loudmouth speaks at full blast. The Autobot is louder than everyone, and his audio-processor-shattering volume never stops. This can be intimidating to enemies in battle, even if it's constantly blowing his allies' cover. When Loudmouth unites with other bots, he gives them the ability to disable enemy systems with a Circuit Shock Disruptor.
Titan Master figures can become the head for Deluxe Class, Voyager Class, or Leader Class Titans Return figures (each sold separately). This Titan Master Loudmouth figure converts from robot to head mode and back in 1 step. It comes with a mini hovercraft vehicle that converts to a weapon for Titans Return Deluxe, Voyager, or Leader Class figures. Choose from Autobot and Decepticon Titan Master characters, unite them with other figures, and power up for battle!
titanmasterloudmouth
630509403721
133843
Out of Stock
New