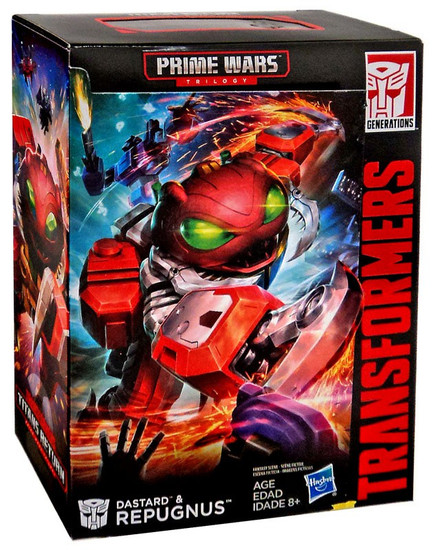 Celebrate the Prime Wars Trilogy with this special edition Titans Return Repugnus figure. It's designed like the original G1 version, the first time a G1-style Repugnus has been released since the character's debut in 1987. Plus, its the only Transformers figure that includes the special edition orange Solus Prime Prime Master figure.
The 5.5-inch scale Deluxe Class figure also comes with a Titan Master Dastard figure. The Titan Master figure becomes the head of the Repugnus figure. The Repugnus figure converts from robot to monster in 19 steps. The Prime Master figure converts between robot and spark in 1 step.
Repugnus is the third Monsterbot figure released in the Titans Return line. Add this to figure to your Monsterbots collection to complete the team of Autobot troublemakers who push the limits of what it means to be a hero. (Additional Monsterbot figures are each sold separately. Subject to availability.)
dastardrepugnus
630509626984
269812
In Stock
New