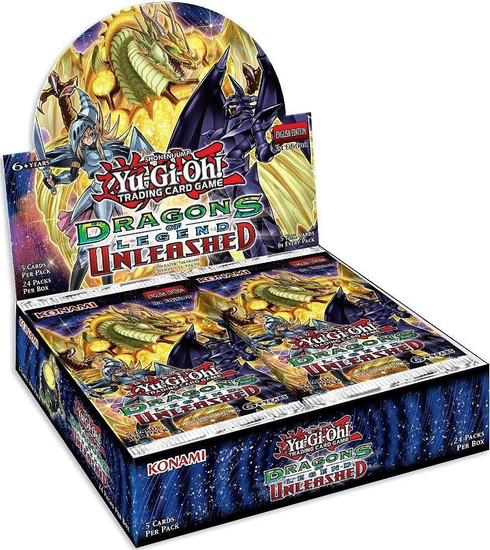 Dragons of Legend Unleashed is a 73-card set that contains a mix of cards new and old thatll please collectors, fans of the TV show, and serious Duelists, spanning all five of the Yu-Gi-Oh! TV series:

From Yu-Gi-Oh! GX, Alexis Rhodes Cyber Angel Ritual Monsters and five new planetary monsters including The Blazing Mars and The Grand Jupiter (finishing out a theme that started out way back in 2008).

From Zexel youll find several new Number Xyz Monsters, including the booster sets headliner, Number 100: Numeron Dragon, with the triple powers to massively increase its Attack Points, convert all monsters on the field into Spells or Traps, and endlessly summon itself from the Graveyard when youre attacked.

From the latest Yu-Gi-Oh! ARC-V come the Cardian monsters, based on the Japanese game of hanafuda, this theme contains cards that depict other cards!

Finally, for fans of the original Yu-Gi-Oh! series, Dragons of Legend Unleashed collects the most heavily-demanded (and hard to get!) cards from Dragons of Legend and Dragons of Legend 2 and makes them available once again. So Duelists who missed out the first time have another chance to get the Legendary Dragon cards Timaeus, Critias, and Hermos, plus their Fusion Monster creations and support cards!

The Dragons of Legend Unleashed booster set contains 73 cards in all: 53 Ultra Rares and 20 Secret Rares.