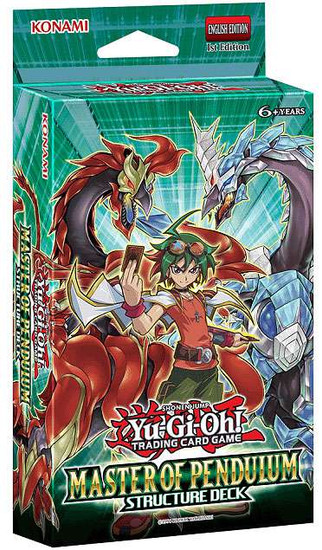 SDMP New Pendulum Monsters arise in the Master of Pendulum Structure Deck, bringing with them powerful effects and strategies to mystify your opponent! In addition to these monsters, the Master of Pendulum Structure Deck contains 10 brand-new cards, including brand-new Synchro and Xyz Monsters!
Spellcasters abound in the Master of Pendulum Structure Deck, empowering you with the ability to destroy opponent cards with the tip of a hat! Dragonvein Magician and Dragonpit Magician do just that, by discarding Pendulum Monsters to target your opponent's Monster or Spell/Trap card and destroy them! The Pendulum Call Spell Card lets you pick a perfect pair of Magician Pendulum Monsters while protecting the Magician cards in your Pendulum Zones. This formidable Structure Deck even lets you dabble in Fusion, Synchro, and Xyz Summoning and includes one of each kind of monster! Try your hand at Synchro Summoning Odd-Eyes Meteor Burst Dragon or double down on Level 7 monsters to Xyz Summon Odd-Eyes Absolute Dragon!
This 43-card Deck has great synergy with the Clash of Rebellions and Dimension of Chaos booster sets, and includes cards that new and experienced Duelists will enjoy!
The Master of Pendulum Structure Deck set contains 38 Common Cards, 2 Ultra Rare Cards, 3 Super Rare Cards, 1 Dueling Guide, 1 Rulebook and 1 Deluxe Game Mat.Master of Pendulum is focused on Pendulum Summon monsters. The deck includes 2 new dragons and is great for veterans and new players alike. The deck features many core cards that are reprinted to make it a solidly playable deck. The deck has support for "Magician", "Performapal" and "Odd-Eyes" themes.
Includes:
- 2 Ultra Rare
- 3 Super Rares
- 6 Normal Parallel Rares
- 32 Commons
masterofpendulumstructuredeck
083717825661
229095
Out of Stock
New