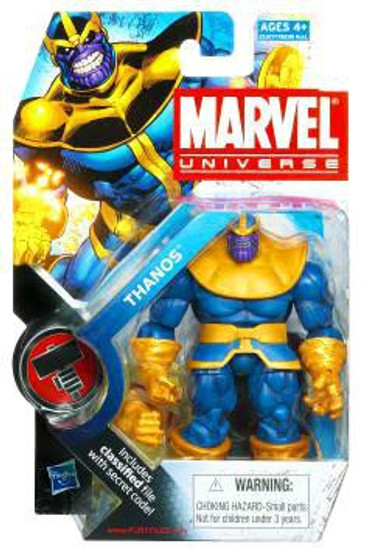 Born disfigured, Thanos became obsessed with mortality at an early age. As he grew and came into the power he had inherited from his Eternal parents, his obsession became a determination to wipe out all life in the universe. For ages, he has traveled the stars, seeking ways to finally achieve his dream of a cosmos at peace, with not a single living thing to mar it. From time to time, he has very nearly achieved this goal, and been stopped only by the cooperation of the most powerful beings in the universe.
Intricately detailed down to the last muscle, this articulated Thanos action figure is ready to fight! Send him into combat with his hand accessory to fight for the fate of the world or leave him posed for action on his stand as a warning against enemies everywhere. The battle is just beginning and the power is in the palm of your hands!
Figure comes with a hand accessory, display stand and a classified file with a secret code.
WARNING: CHOKING HAZARD Small parts. Not for children under 3 years.
marvelthanos
653569510666
118785
In Stock
New