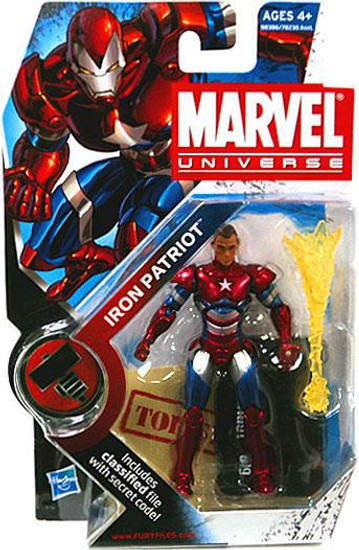 This Marvel Universe Action Figure - Iron Patriot is an articulated action figure that comes with an energy burst accessory and a stand for display after you're done enacting all of your fiercest good-versus-evil battles! Figure comes with a classified file with a secret code.

When Spider-Man warned the Avengers about how dangerous Norman Osborn was, no one listened. He was a has-been bad guy, living under the thumb of Tony Stark, locked up in Thunderbolts Mountain. Now, of course, he's on top of the world, living the life of a beloved hero while lining his pockets and spreading his evil. He's got the real heroes on the run, and he's traded up his old Green Goblin costume for a suit of powerful, high-tech armor of his own design.

Intricately detailed down to the last muscle, this articulated Iron Patriot action figure is ready to fight! Send him into combat with his energy burst accessory to fight for the fate of the world or leave him posed for action on his stand as a warning against evil-doers everywhere. The battle is just beginning and the power is in your palm of your hands!