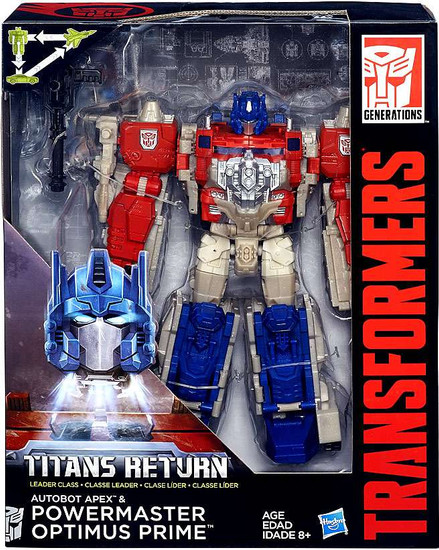 The TRANSFORMERS battle explodes into uncharted territory the return of the TITANS! To control an ancient race of giant, city - sized warriors TITANS the AUTOBOTS and DECEPTICONS must harness the power of TITAN MASTERS , smaller bots that give bigger bots enhanced abilities in battle. Each TRANSFORMERS GENERATIONS TITANS RETURN Leader Class figure comes with a TITAN MASTER figure that becomes the head of the Leader figure. When the Leader Class figure is in vehicle mode, the Titan Master figure rides inside. Each TITAN MASTER figure can become the head for Deluxe Class, Voyager Class, or Leader Class TRANSFORMERS GENERATIONS TITANS RETURN figures. Each Leader Class figure is also triple changers that converts between robot, vehicle, and battle station modes. Battle stations can connect with the biggest figure in the TRANSFORMERS GENERATIONS TITANS RETURN line, FORTRESS MAXIMUS (sold separately), to form a giant CYBERTRON City.
leaderpowermaster
630509396474
129130
Out of Stock
New