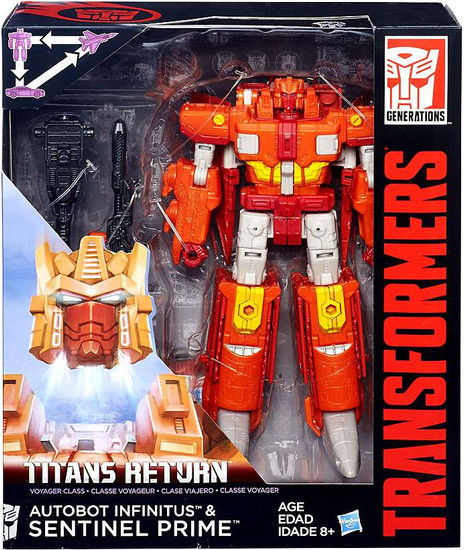 The Transformers battle explodes into uncharted territory when the Titans Return! To control an ancient race of giant, city-sized warriors -- the Titans -- the Autobots and Decepticons must harness the power of Titan Masters, smaller bots that give bigger bots increased abilities in battle. Join the battle with Transformers Generations Titans Return figures!

Sentinel Prime has returned. One of the most powerful warriors who has ever lived, the former Autobot leader looks to impose his will on a universe that sits on the edge of full-blown war. The Titan Master Autobot Infinitus gives Sentinel Prime temporary invincibility by shielding him with a forcefield.

Each Titans Return Voyager Class figure features three modes! This Triple Changer Sentinel Prime figure converts between robot, space jet, and train modes. It converts from robot to space jet in 11 steps, then from space jet to train in 19 steps. The Titan Master Autobot Infinitus figure converts from robot to head and back in 1 step. When the Sentinel Prime figure is in either vehicle mode, the Autobot Infinitus figure fits inside. Also includes a blaster accessory and a collectible character card with tech specs.
voyagerprimetitans
630509424337
133888
Out of Stock
New