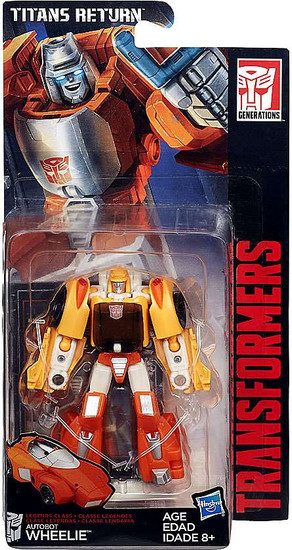 The Transformers battle explodes into uncharted territory when the Titans Return, To control an ancient race of giant, city-sized warriors -- the Titans -- the Autobots and Decepticons must harness the power of Titan Masters, smaller bots that give bigger bots increased abilities in battle. Join the battle with Transformers Generations Titans Return figures.
Autobot Wheelie is small, and if you heard him talk, you wouldn't think he would last very long in battle. But the Decepticons haven't managed to deactivate him yet. In fact, he's taken out a few Decepticons himself. The Autobot has mastered the skills to survive any situation on or off the battlefield. The other thing he does better than any bot is rhyme. In fact, he does it all the time. It makes other Autobots groan. And that's why Autobot Wheelie spends so much time alone.
Titans Return Legends Class figures deliver exciting Transformers conversion play in a smaller scale. This Legends Class Autobot Wheelie figure converts from robot mode to sports car mode in 13 steps. It includes a collectible character card with character art on the front and tech specs on the back.
legendswheelie
630509414475
116992
Out of Stock
New