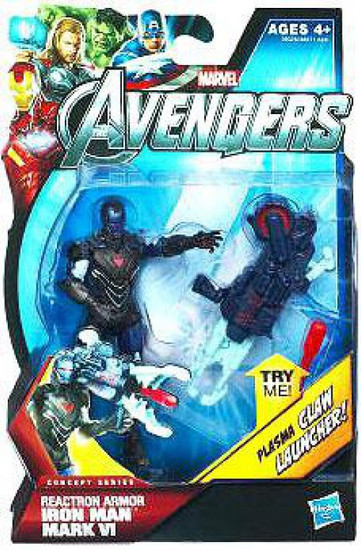 There are forces in the universe of which science has only the most basic understanding. This armor was designed to explore the very edges of black holes, where time is twisted inside out, and matter is crushed to nothing. Where not even light can escape, you can find IRON MAN thriving.

This is IRON MAN like youve never seen him before! This Reactron Armor IRON MAN Mark VI figure looks just like the same metal-clad hero youve always admired. But this IRON MAN figure fights in different situations, and that calls for all new weaponry. His advanced black and blue armor lets him fight where no one else could, and his enormous plasma claw launcher gives him the firepower he needs to prevail anywhere in the universe! Hes ready for anything and your Reactron Armor IRON MAN Mark VI figure will take your battles to the next level!