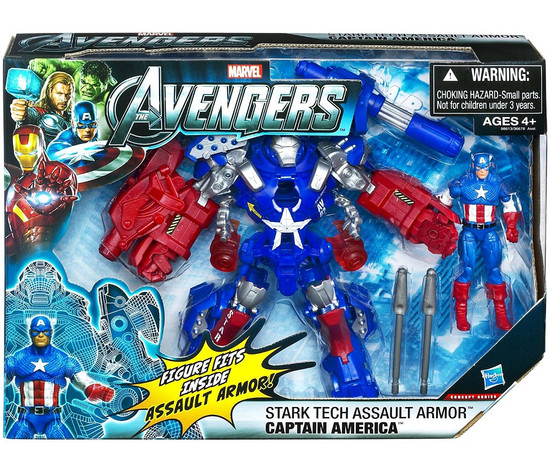 When an AVENGERS mission looks like it might be too dangerous to accomplish without a little extra protection, CAPTAIN AMERICA suits up in his STARK TECH ASSAULT ARMOR. It enhances his incredible combat skills with a collection of the worlds most powerful weapons, making the Super Soldier an unstoppable fighting force!

Villains might as well skip town youre your CAPTAIN AMERICA figure is in his STARK TECH ASSAULT ARMOR! This detailed figure looks just like the patriotic hero you already know. But hes got something other figures dont have a suit of STARK TECH ASSAULT ARMOR that makes him practically invincible! The armors hatch opens so you can fit your CAPTAIN AMERICA figure inside. Snap on the shoulder and arm blasters, and youll have the ultimate enemy of evildoers everywhere!

Figure comes with armor and accessories.